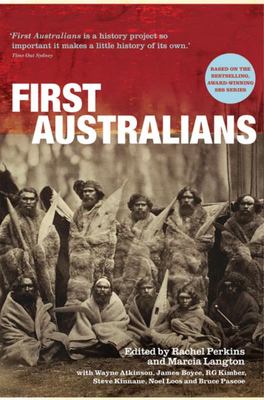 "First Australiansis the dramatic story of the collision of two worlds that created contemporary Australia. Told from the perspective of Australia's first people, it vividly brings to life the events that unfolded when the oldest living culture in the world was overrun by the world's greatest empire.
Seven of Australia's leading historians reveal the true stories of individuals both black and white caught in an epic drama of friendship, revenge, loss and victory in Australia's most transformative period of history.
Their story begins in 1788 in Warrane, now known as Sydney, with the friendship between an Englishman, Governor Phillip, and the kidnapped warrior Bennelong. It ends in 1992 with Koiki Mabo's legal challenge to the foundation of Australia.
By illuminating a handful of extraordinary lives spanning two centuries, First Australiansreveals, through their eyes, the events that shaped a new nation."

Rachel Perkins (editor) is from the Arrernte and Kalkadoon people. She directed the films Radiance, One Night the Moon and Bran Nue Dae, and is one of the directors, writers and producers of First Australians. Marcia Langton (editor) is Foundation Professor of Australian Indigenous Studies at the University of Melbourne. She is trained as an anthropologist and geographer, and contributes to policy and debates on Aboriginal land and resource issues, as well as the visual and performing arts and other social and cultural matters.