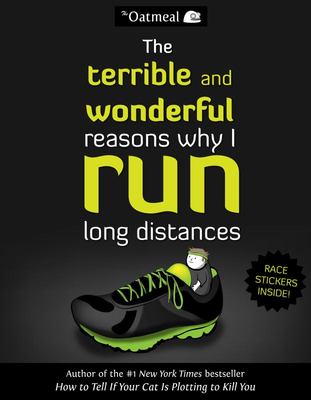 The Terrible and Wonderful Reasons Why I Run Long Distances

"All runners wonder, at some point or another, why we do what we do. Mr. Inman's explanation is the best I've ever seen. And the funniest. Because he is clinically insane."
-Mark Remy, editor at large, Runner's World, author of The Runner's Rule Book

"He runs. He sweats. He heaves. He hates it. He loves it. He runs so hard his toenails fall off. He asks himself, why? Why do I do this? Here, gorgeously, bravely, hilariously, is Matt's deeply honest answer."
-Robert Krulwich, NPR

"Finally A voice that sings with the Blerches of angels "
-Christopher McDougall, author of Born to Run

It's a book about gluttony, vanity, bliss, electrical storms, ranch dressing, and Godzilla. It's a book about all the terrible and wonderful reasons we wake up each day and propel our bodies through rain, shine, heaven, and hell.

From #1 New York Times best-selling author, Matthew Inman, AKA The Oatmeal, comes this hilarious, beautiful, poignant collection of comics and stories about running, eating, and one cartoonist's reasons for jogging across mountains until his toenails fall off.

Containing over 70 pages of never-before-seen material, including "A Lazy Cartoonist's Guide to Becoming a Runner" and "The Blerch's Guide to Dieting," this book also comes with Blerch race stickers.

TheOatmeal.com is an entertainment Web site full of comics, quizzes, and stories. The site gets more than 7 million unique visitors and 30 million page views a month; 250,000 blogs and Web sites have linked to it. TheOatmeal.com is written, drawn, and coded by Matthew Inman, a king of all trades when it comes to the Web. Matthew Inman is a Web designer and developer from Seattle, Washington. He launched the Oatmeal.com in 2009.