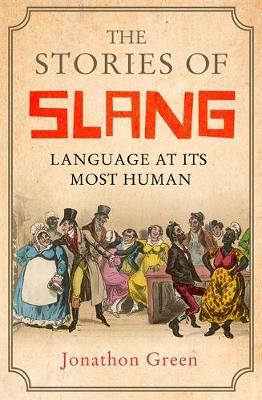 The Stories of Slang : Language at Its Most Human

Like the flesh-and-blood humans whose uncensored emotions it represents, slang's obsessions are sex, the body and its functions, and intoxication: drink and drugs. Slang does not do kind. It's about hatreds - both intimate and and national - about the insults that follow on, the sneers and the put-downs. Caring, sharing and compassion? Not at this address. There are over 10,000 terms focusing on sex, but love? Not one.Jonathon Green, aka 'Mr Slang', has drawn on the 600,000-plus citations that make up his magisterial Green's Dictionary of Slang (published 2010, now online at www.greensdictofslang.com) to tell some of slang's most entertaining stories. Categories range from The Body to Pulp Diction, via multi-cultural London English and pun-tastic gems.Mostly gazing up from the gutter, slang, perhaps surprisingly, also embraces the stars. These stories may look at drunken sailors, dubious doctors, and a shelf of dangerously potent cocktails, but slang does class acts as well. None more so than Shakespeare. Devotee of the double entendre, master of the pun, first to put nearly 300 slang terms in print. 'Shakespeare, uses, at my count, just over five hundred "slang" terms, of which 277 are currently the first recorded use of a given term. Among these are the beast with two backs, every mother's son, fat-headed, heifer (for woman), pickers and stealers (hands), small beer (insignificant matters), what the dickens, and many more.'http://jonathongreen.co.uk

JONATHON GREEN is a lexicographer, that is a dictionary maker, specialising in slang, about which he has been compiling dictionaries, writing and broadcasting since 1984. He has also written a history of lexicography. After working on his university newspaper he joined the London 'underground press' in 1969, working for most of the then available titles, such as Friends, IT and Oz. He has been publishing books since the mid-1970s, spending the next decade putting together a number of dictionaries of quotations, before he moved into what remains his primary interest, slang. Jonathon's slang work has reached its climax, but he trusts not its end, with the publication in 2010 of Green's Dictionary of Slang, a three-volume, 6,200-page dictionary 'on historical principles' offering some 110,000 words and phrases, backed up by around 410,000 citations or usage examples. The book covers all anglophone countries and its timeline stretches from around 1500 up to the present day. For those who prefer something less academic, he published the Chambers Slang Dictionary, a single volume book, in 2008. Website: http://jonathongreen.co.uk The Dabbler: http://thedabbler.co.uk/ (as Mister Slang) Twitter: @misterslangThe Timelines of Slang: http://thetimelinesofslang.tumblr.com/