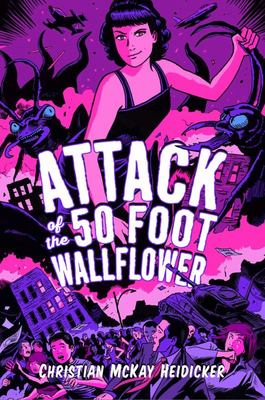 Attack of the 50 Foot Wallflower

"Wild, weird, hilarious, heartfelt, imaginative, and inventive. The spirit of Kurt Vonnegut is alive and well in its pages." --Jeff Zentner, author of The Serpent King   "A satisfying mix of mild adolescent angst and creature feature comedy." --BCCB (starred review)   "Frighteningly fun." --Booklist (starred review)   From the author of Cure for the Common Universe comes a monster-movie-like novel that bravely challenges perceived notions of beauty, identity, and modern voyeurism. Phoebe Lane is a lightning rod for monsters. She and her mom are forced to flee flesh-eating plants, blobs from outer space, and radioactive ants. They survive thanks to Phoebe's dad--an invisible titan, whose giant eyes warn them where the next monster attack will take place.   All Phoebe wants is to stop running from motel to motel and start living a monster-free life in New York or Paris. But when her mom mysteriously vanishes, Phoebe is left to fend for herself in small-town Pennybrooke.   That's when Phoebe starts to transform...   Christian McKay Heidicker returns with a book unlike any other, challenging perceived notions of beauty, identity, and what it means to be a monster.