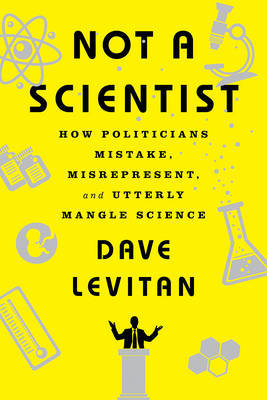 Not a Scientist: How Politicians Mistake, Misrepresent, and Utterly Mangle Science

In 1980, Ronald Reagan created one of the most stupid talking points of all time: "I'm not a scientist, but...". Since then, politicians have repeatedly committed egregious transgressions against scientific knowledge prefaced by this seemingly innocuous phrase. Yet, as science journalist Dave Levitan reveals, that line is just the tip of the melting iceberg when it comes to rhetorical tools wielded to attack scientific findings that don't cooperate with political agendas. Just listen to Mike Huckabee dismiss climate change as "a sunburn", Donald Trump suggest that vaccines cause autism or Todd Akin's infamous invention of "legitimate rape". With a taxonomer's eye, Levitan captures and categorises these deceptions by chapter, assigning delightful names like "The Butter-Up and Undercut", "The Literal Nitpick", "The Straight-Up Fabrication" and many more. His sharp humour dismantles America's leaders' deceptive arguments while illuminating the real science behind the worst soundbites from these elected non-scientists.

Dave Levitan is a journalist whose work has appeared in the Philadelphia Inquirer, Scientific American, Slate, and many other outlets. He lives near Philadelphia with his wife.